A TRIBUTE TO JOSÉ LUIS GÓMEZ-SKARMETA

José Luis was a Research Professor at the Andalusian Center for Developmental Biology (CABD) in Seville and Director of its María de Maeztu Unit of Excellence. His pioneering  contributions towards understanding the role of the genomic elements in embryonic development and evolution has given rise to an international school, with many of his disciples breaking new ground on the frontiers of science.

Join us to celebrate José Luis’s legacy in an Open Session at the SEBD2020:

Genomes, A Tribute to J.L. Gómez-Skarmeta

A link to the session will be announced. 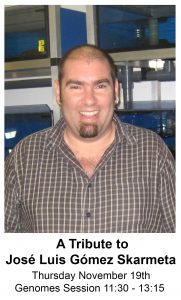